How do you see India – Dominican Republic relations so far?

Well, on May 4, we will be celebrating 20 years of diplomatic relations with India. I think in these last 20 years, a lot has been achieved. We opened a resident mission in 2005. I am here for the last 13 years now, hence I am the longest serving ambassador in India that’s the reason I am the Dean of the Diplomatic Corps. The trade between India and the Dominican Republic has increased dramatically since we opened the mission here. We also had high-level State visits from both sides. Our President, was here in 2010 and also we had three Ministerial visit by the Minister’s of States for Foreign Affairs, Government of India visit the Dominican Republic.

We have a friendly relations with India and the people to people contact has increased in these year’s. The introduction of the electronic Visa program for Dominican citizens by the Government of India has helped a lot in building up the exchange of citizens from either sides. Now that we are waiting for India to establish a Resident Mission in the Dominican Republic by which I am sure would strengthen and increase the Bilateral Trade Relation between the two countries. In the year 2010, it was announced by then Minister of State, Mr. Shashi Tharoor during his visit that India would set up its Mission in Uruguay, Ecuador, Georgia and Dominican Republic. We all welcomed his decision but due to certain reasons the opening up of the Indian Missions were delayed and then there was a change of Government in India. We also approached the new Government with the same request several times but nothing happened.

Now that the Ministry of External Affairs have decided to open some new Embassies in Africa which I welcome as a Dean of the Diplomatic Crops but on the other hand I would also like to remind MEA about their promise which was made in the year 2010 by the then Minister of State Mr. Shashi Tharoor. We work very closely with the Indian embassy in Cuba which is concurrently accredited to the Dominican Republic. The Indian Ambassador from the Indian Mission in Cuba is in very close contact with our country and also travels frequently to Dominican Republic, as a result we see many activities being done in our Country but still we look forward for an Indian Mission being set up in Dominican Republic which I am sure will boost the present Bilateral Trade between the two countries.

What are the factors that are going against MEA to open Indian missions in Latin American countries especially the Dominican Republic?

I do not think there are any specific factors. As we were informed that the budget allotment for opening up of a new Mission abroad was not done and later there was some shortage of manpower which did not allowed the Ministry of External Affairs to open Indian Missions abroad including Dominican Republic, But now there has been an announcement of some new Indian Missions being set up in Africa, hence, our request to the MEA to open new Indian Missions in Latin America would be considered.

Being the Dean of the Diplomatic Corps in India, what measures do you think should be taken by the Indian Government to enhance trade relations with Latin American Countries? What are your views?

I believe the Indian Government is really increasing its presence worldwide, not only in Latin America but also in Africa, Pacific, Central Asia and Europe. There had been lots of States visit from The Prime Minister, The President, The Vice-President and from the Ministry of Foreign Affairs. High-level  Officers from different Ministries travel all over the world. We have seen this global presence of India, but we do feel as Latin Americans that the presence is not that prominent in our region as it is elsewhere, physical distance might be the cause but now with flights and technology, it is quite easy to travel to the other side of the world.

This year we are experiencing new heights in the Bilateral relation between India and the Latin American countries with many State visits from India in that region. First, the  visit of the Vice President of India to Costa Rica and Paraguay, and The President of India will be visiting Chile and Bolivia at the end of this month, on the other hand we have seen the first state visit of the Latin American President this year with the visit of The President of Argentina and we understand that maybe one or two more other Latin American Presidents will be keen to visit India this year. We hope that this increases more interaction between Latin America and India, but we want to see more such State visits with Prime Minister Modi, Madam Sushma Swaraj in our region and not be limited to Brazil and BRICS.

There are very less diplomatic visits from your country and from Latin America, any specific reason?

I don’t agree with that statement, I think there have been a lot of State visits in the past years  with even countries that don’t have missions in India like some small islands in the Caribbean region, Antigua, Dominica, Grenada & Honduras. Apart from the high level State visits from these region many students are here in India for further studies. The diplomatic relation between the two region India and Latin America can become stronger and more trade can flourish if the Government of India increases the Indian Missions in Latin American region. The high level State visits should also be initiated from the Indian side to our region which will definitely increase the Bilateral Trade between the two regions. 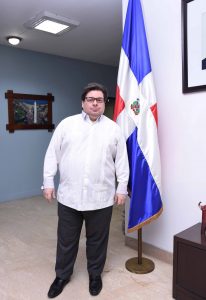 We understand that visits of Indian tourist to your country are few in number but is the same from your end. Is there any specific plan to increase this number from both countries?

We believe the numbers are increasing every year. The fact that now the Dominicans and other Latin Americans can use the electronic visa system which has been a very positive thing. Sometimes people have to get a visa in countries where India do not have embassies. So people from Ecuador had to go to Columbia to get a visa. Someone from Paraguay had to go to Argentina to get a visa, somebody from Bolivia had to go to Peru to get a visa, that becomes more costly. But now with the electronic visa system, which is a great asset of India to increase tourism. People do not have to travel to get a Visa if they are coming for tourism from those countries.

We have also facilitated the visa process for Indians, if you have a US visa, UK, or Schengen visa, you do not need a visa for the Dominican Republic, you can visit with a tourist card if you going for tourism purposes. We also try to expedite any visa request here, especially if they are coming from Mumbai, Chennai & Kolkata, we also have an agreement with VFS Global. Somebody can apply for a visa from the interior of India, in Lucknow, in Chandigarh, in different cities where VFS Global is present. As well in Sri Lanka, Bangladesh, Nepal, if they can go to the VFS office and process the visas from there. This is facilitating the visa issue for nationals not only of India but also the neighboring countries.

Is there any direct connectivity?

I read about the presence of numerous dance academies in your countries, so how popular is Bollywood in the Dominican Republic?

Here in India, I would say that Bachata and Salsa are more popular in Bollywood, but anyone who has seen a Bollywood movie has fallen in love with the Bollywood moves. One of my dreams as a Ambassador is to have a famous Dominican actor make a fusion of Bachata and Bollywood moves, or one of the Bollywood actors go to the Dominican Republic and do some kind of fusion between Latin music and Indian music. I think it will be a great thing.

What are your plans to boost the bilateral trade relationship between India and the Dominican Republic?

CII is planning a delegation of businessmen to the Dominican Republic soon. We also constantly promoting the visits of Dominican businessmen, and we have a lot of students that are also taking advantage of hi-tech programme of the Ministry of External Affairs, which we are very grateful for. I believe that little by little things are moving between India and the Dominican Republic. Our 20th year of anniversary which is celebrated on May 4, will just jumpstart what we have achieved in this 20 years, and we hope that when we celebrate 30 years, India has a mission in the Dominican Republic and there is a lot more trade and interaction between the two countries.

The High Commissioner-designate of the Republic of Seychelles, Mr. Thomas Selby Pillay presenting his credentials to the President, Shri Ram Nath Kovind, at Rashtrapati Bhavan, in New Delhi, India

INTERVIEWS
Author Envoy Excellency BureauPosted on October 10, 2019
“India and Ireland sharing a common bond and destiny” India and Ireland are connected strongly on the grounds of history, culture, education, how do...