New Delhi: Vice President of India Shri Venkaiah Naidu undertook an official visit to Vietnam from 9-12 May, 2019 at the invitation extended by H.E. Ms. Dang Thi Ngoc Thinh, Vice President of Vietnam. He was also invited by the Vietnam Buddhist Sangha and the organizers of the 16th UN Day of Vesak that is being held at the Tam Chuc Pagoda in Hanam Province in Vietnam to deliver the keynote address during the inaugural session.

Vice President Naidu paid respects at the Monument of National Heroes and Martyrs and at the Ho Chi Minh Mausoleum at Hanoi. He addressed members of the Indian Community and Friends of India on 9th May, 2019. He visited the Embassy of India, Hanoi on 11th May, 2019 and paid floral tributes at the bust of Mahatma Gandhi there. He, thereafter, interacted with beneficiaries of the Jaipur Foot Artificial Limb Fitment Camp that is being held Quang Ninh and Yen Bai provinces under the “India for Humanity” Initiative launched by Ministry of External Affairs to commemorate the 150th Birth Anniversary of Mahatma Gandhi.

India and Vietnam have a strong bilateral relationship based on mutual trust, understanding and convergence of views on regional and international issues. Vice President’s talks with his Vietnamese interlocutors were extensive and productive and covered whole range of bilateral and multilateral cooperation. Both sides agreed to further strengthen cooperation in defence and security, peaceful uses of atomic energy and outer space, oil and gas, renewable energy, agriculture and innovation-based sectors.
Vietnam is an important trade partner of India. Bilateral trade stood at nearly US Dollars 14 billion last year having nearly doubled from US Dollars 7.8 billion three years ago. Vice President Naidu and Prime Minister Phuc expressed commitment to enhancing trade and investments and agreed to facilitate direct air connectivity to promote tourism, trade and people-to-people relations.
Both sides reiterated the importance of building a peaceful and prosperous Indo-Pacific region on the basis of respect for national sovereignty and international law, and expressed full commitment to an open, transparent, inclusive and rules-based regional architecture based on freedom of navigation and overflight, unimpeded economic activities and peaceful settlement of disputes in accordance with international law. 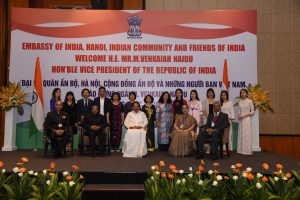 Vice President Naidu’s visit has imparted momentum to the bilateral relationship and provided an opportunity to review various areas of collaboration and cooperation of the Comprehensive Strategic Partnership, with Vietnam’s leadership. His participation at the UN Day of Vesak Celebrations emphasized shared civilizational heritage of the two countries.

COMMUNIQUÉ – Twenty-Second Meeting of the Council for Foreign and Community Relations (COFCOR), St. George’s, Grenada, 13-14 May 2019