Vice President was accompanied by a high-level delegation including Minister of State for Tourism Shri K.J. Alphons, Members of Parliament and senior officials from the Government of India.

This was the first high level visit from India to Paraguay since the establishment of diplomatic relations in 1961.

The meetings were warm and friendly and there was commitment on both sides to strengthen and deepen relations. 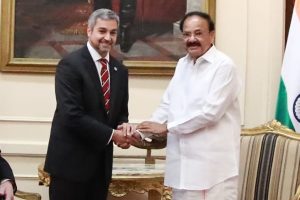 India and Paraguay traditionally share warm and friendly ties. Trade is one of the main drivers of our relationship. Bilateral trade has increased almost ten-fold over the last ten years and reached USD 334 million in 2017-18 from USD 40 million in 2008-09. Main export items from India to Paraguay include iron and steel, plastics, chemicals, vehicles and auto parts; while Paraguay’s exports to India are composed mainly of vegetable oil, oils and resinoids, and aluminum. Brand India in the automobile sector has a strong presence in Paraguay.

ASEAN - Promoting and protecting the rights of women and children

Visit of Minister for Foreign Affairs of the Republic of Gambia, H.E. Dr. Mamadou Tangara to India