New Delhi: To celebrate the 21st Anniversary of ECON GROUP the best way is to devote itself to the betterment of the society by organizing a Blood Donation Camp and Tree Plantation at its Wastewater Treatment Plant in Bawana. 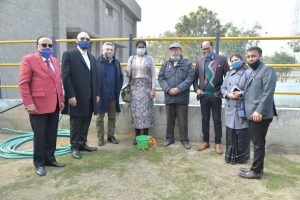 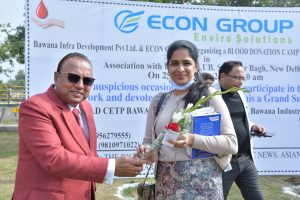 The Ambassador’s graced the occasion, encouraged everyone present to dedicate service towards the betterment of our society and save the planet. They also participated in the Tree Plantation Camp and planted trees and had a walk -a -round of the entire CBT Wastewater Treatment Plant and took interest in the way it is working in such a big capacity.

Lions Club, Shalimar Bagh also joined hands in this noble cause by providing the Blood Donation Van with a Doctor and complete staff, who assisted in collecting the blood. 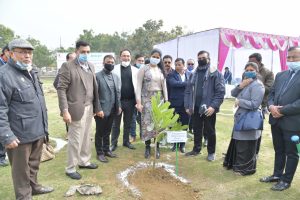 ECON GROUP is one of the largest companies engaged in the Waste Management Works in Northern India. The company came into existence in the year 2000 under the able guidance of its founder Shri. Arun Kumar Gupta, whose hard work and dedication has put the company into the National Platform and now his son Mr. Arpit Gupta, the Managing Director & Mrs. Shruti Gupta the Operation Head has made the ECON GROUP to spread its wings into other sectors such as Infrastructure, Interior & Architecture, Export & Imports of Argo Products, Tea Plantation and exploring other sectors as well.

The event was also supported by Bawana Infra Development Pvt. Ltd, the company engaged in the development of the Bawana Industrial Area which houses more than 16,000 factories and is one of the largest Industrial Area in whole of Asia.

The entire staff of both ECON GROUP & Bawana Infra Development donated Blood and planted trees to commemorate the occasion. Grand Lunch and food packets were distributed to the entire staff.