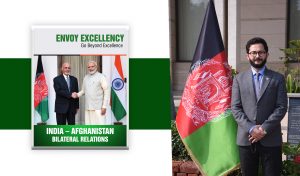 How do you rate the present bilateral relation between Afghanistan and India under the current regime of Prime Minister Narendra Modi?

Our bilateral relations, especially post 2001, have continually witnessed the upward trajectory, where the horizon of our ties is perpetually widening as a result of entrenched and consolidated reinforcement of transactions in terms of social, economic, political, and security compacts. However, as Honorable Prime Minister Narendra Modi said in Kabul during the inauguration of a new parliament building, a priceless gift by our Indian friends, “It (the parliament building) will stand as an enduring symbol of the ties of emotions and values, of affection and aspirations that bind us in a special relationship.” This shows that our ties are more than just transactional; they are value- and emotions-based.  And the fact that our bilateral compacts and agreements have reached new heights itself shows that the India-Afghanistan relations have improved substantially under the leadership of His Excellency President Ashraf Ghani and Honorable Prime Minister Narendra Modi. The examples are aplenty from the construction of the Afghan-India Friendship Dam to the air cargo corridor to the opening of Chabahar Sea route to the more recent steadfast assistance of the critical medical drugs and equipments when the Corona pandemic took the entire world off guard. Further, India has always shown its unwavering support to the official narrative of the government of Afghanistan for any peace negotiation, and the same was reiterated lately by our Indian allies.

A significant makeover to end the ongoing war in Afghanistan is in progress. What are the recent developments and challenges facing Afghan Peace Talks?

The peace process in Afghanistan has gone through various stages of developments already, under which the major developments have been the successful forging of national, regional, and international consensus by the Afghan government, the proactive engagement with the Taliban by our diverse negotiating team, the establishment of Joya Jirga, the ensuing prisoner release, and so on. This highlights how vigorously the government has been working to tailoring the platform for political reconciliation. However, while the reduction in violence was expected as a result of all such arduous efforts, it has only increased in the recent times. This is the biggest challenge we are facing as a nation, but as our government has unequivocally stated many times before, the gains of the last two decades will not be compromised in any way and that is the redline of a new Afghanistan, which has an active presence of youth, social activists, women representatives, civil societies in the society, economy, and polity of the nation.

Afghanistan leader Abdullah Abdullah recently concluded Delhi visit where he met the Prime Minister and Security Advisor of India. What were the key points discussed during the meet?

When the Chairman of the High Council for National Reconciliation in Afghanistan, His Excellency Abdullah Abdullah came to India, he met with the officials in the top echelon of the Indian administration, including Honorable Prime Minister Modi and National Security Adviser Ajit Doval. During the discussions, India assured him of its full support for the peace efforts, and further said that “any peace settlement acceptable to Afghans will have the support of India.”

How has Covid-19 affected Afghanistan? What are the steps being taken the Government to control the situation?

Like anywhere else in the world, the Covid-19 pandemic impacted Afghanistan severely. In response, our government immediately set up the Emergency Committee for the Prevention of COVID-19 to assess the situation and initiate relevant actions, which was followed by various enforcement of the precautionary measures, including the lockdown, partial lockdown, augmenting testing facilities and process throughout all the provinces, and so on. The government further took other measures like controlling the price of essential items such as foodstuff and consumables to ensure food security and accessibility of foodstuff to all the people in the country. Besides, a separate emergency budget was allocated to some provinces with high transmission rate for fighting the spread of covid-19.

How has the overall trade between the two countries been affected due to the pandemic? What steps are being taken to make the situation better?

The bilateral trade between India and Afghanistan has US$1.5 billion mark in the financial year 2019-20. This came as a result of consistently improved trade growth over the previous 5 years. For instance, between 2015-16 and 2019-20, Afghanistan’s exports to India grew by 72%. Afghanistan’s export value increased over 21% 2019-20 compared to 2018-19. However, the Corona pandemic also hit the trade sector severely as it did others as well. But as things are resuming gradually, including the transit routes and cargo flights, we are hopeful of regaining our trade momentum with India.

Afghan youths seeking admission in IITs (Indian Institute of Technology) can now appear for the various entrance examinations held in India. What other similar institutes of higher education can be opened for the youths of both nations?

Since 2006, more than 60,000 Afghan students have graduated from India, and even presently, about 17,000 students are studying at various institutions throughout India. In this regard, our Indian friends at the ICCR deserve a special credit and commendation. And as the demographic dividend in Afghanistan is becoming more and more active and aspiring, the demand for professional courses is also on the rise. In such respect, it is a great news for our youth to appear for the one of the most prestigious and premier engineering institutions in India and the world. Our youth graduating from the IITs will take the technical know-how of our country at new heights. Similarly, somewhat same procedure could be broached and mulled bilaterally for the admissions of Afghan youth in the premier institutions like AIIMS.

A word for the reader of Envoy Excellency.

As His Excellency President Ghani said, “we (India and Afghanistan) are bound by a million ties through millennium. We have stood by each other in the best and worst of times,” I would reaffirm our commitment to this special bilateral relation that goes beyond the realms of trade and politics. Our time-tested friendship has stood through the thick and thin of various global events and changes, and today, it truly epitomizes the cradle of hope, trust, and unwavering commitment. For the continued support from the great Indian people and nation, I would express my deepest gratitude. May this bond continue to be strengthened in the coming times.