New Delhi: Embassy of Georgia in India is delighted to bring you this richly illustrated Hindi translation of the Georgian epic, Knight in the Panther’s Skin by Shota Rustaveli. The epic poem follows the adventures of a young Hindostani Prince, Tariel. This lyrical translation is a tribute to the centuries old friendship between Georgia and India. Published by Yatra Books as “Sher Ki Khaal Wala Samant Shoorvir” in Hindi, the book was launched on March 2, 2021, in New Delhi.

His Excellency Ambassador Archil Dzuliashvili said, “From the day I arrived in India, I wanted to bring to the Indian readers an essence of Georgian literature, an epic that has enshrined India in the mind of Georgians as a mythical country with high spirituality and a glorious past. I am delighted that the Hindi translation of the greatest and the most recognized masterpiece of 12th-century Georgian poetry, ‘The Knight in the Panther’s Skin’ by Shota Rustaveli, is now available to Indian readers.”

This translation project is a collaboration between the Embassy of Georgia in India and the Yatra Books. This book would not have been possible without the support and encouragement of the ICCR.

Namita Gokhale, Author and Director of Yatra Books said, ‘This inspirational book crosses over the literary and cultural inter-connectivities that constitute our world. It is a triumph of the human imagination.’ 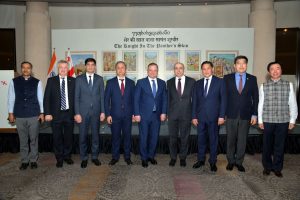 Knight in the Panther’s Skin is the story of a young Hindostani Prince, Tariel, who sets out in search of his beloved, Nestan Darejan, who has been abducted by sea pirates. He travels to Georgia, via Arabia, in search of her and makes friends with two handsome princes along the way, who align with him, and the three of them eventually find the beautiful princess trapped in a fort in Kajeti. A Battle ensues. All’s well that ends well and Tariel and Nestan Darejan return to Hindostan to live happily ever after.

Publisher Neeta Gupta said, “We at Yatra Books are proud to have been associated with this unique project. The Hero of this epic, i.e., the man in the panther’s skin, is from India. So, in a way this translation is a “fictional homecoming” for the protagonist of this classic.”

This is a beautifully told tale in 1587 rhyming couplets, effortlessly translated by the well-known Urdu poet and translator, Dr. Bhupinder ‘Aziz’ Parihar.

Mumbai based artist, Onkar Fondekar, has created a series of 12 miniature paintings to depict scenes from the classic. The portrait of the poet Shota Rustaveli on the cover is one of them.