The External Affairs Ministry welcomed the Vice President with the following words in a tweet- Warm greetings to Vice President of Zambia W.K. Mutale Nalumango, as she arrives in India for the CII-EXIM Bank Conclave. The visit will be an opportunity for promoting trade and commerce between India and Zambia.

The summit was held on the account of the reduced severity of COVID-19 as well as in the midst the ongoing of Russo–Ukraine war since February 2022. Similarly, it became equally evident that the entire project needs to be visualised in a new context because since January 2021, the AfCFTA, as a continental trading area, is in place. Moreover, there are several significant areas where the Indo-African development cooperation is likely to grow. 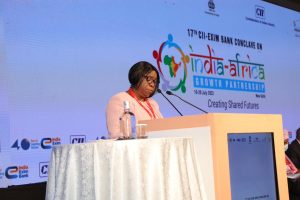 Speaking to reporters in the Indian capital New Delhi on the side-lines of the ongoing Exim Bank India-Africa Growth Partnership Conclave, the Zambian Vice President Mutale Nalumango said: “Over $3 billion of investment by Indian enterprises have been registered in Zambia in the recent past, with more than $5 billion already in the pipeline.” Nalumangoassured investors of asset security in the southern African nation, which is the continent’s second top copper producer.The summit seeks to provide avenues for dialogue on the India Africa Growth Partnership and seek ways of strengthening economic cooperation.

During her visit, the Vice President visited the AMUL Cooperative and Torrent Pharmaceutical plants in Gujarat. She also held discussions with Apollo Hospitals fir enhancing cooperation in the healthcare sector. She noted that many patients from across the world, including Zambia, have benefited from the services of Apollo Hospital of India.

She said that economic growth must also address climate change, effects such as heat waves, floods, droughts and pandemics.

Opening the conference, India’s Minister of Commerce and Industry Piyush Goyal assured Africa of his country’s commitment to supporting the continent’s socio-economic transformation agenda. Mr Goyal said India’s 17-year development cooperation with Africa under the CII Exim Bank India Africa Growth Partnership has given Africa a platform to build socio economic bridges for the benefit of her people. He noted that India would continue to work towards deepening and strengthening business ties with African countries based on the unique needs of individual countries. He said India was drafting a new 25-year development cooperation and partnership plan that would provide the framework for India’s future economic and development partnerships support to Africa.

Briefly, India-Africa development cooperation is growing constantly in diverse spheres. By now a mélange of public sector and private sector enterprises associated with India have spread their networks in Africa.

Visit of Deputy Prime Minister and Foreign Minister of Namibia to India (July 17-21, 2022)