Envoy Excellency Bureau Posted on August 6, 2022August 6, 2022
On August 4, 2022 the Republic of Belarus officially inaugurated the Belarusian Consulate General in Mumbai.
The First Deputy Minister of Foreign Affairs of the Republic of Belarus H.E. Mr.Sergei Aleinik, who was in India on an official visit, and Secretary of Food, Civil Supply and Consumer Protection Department of the Government of Maharashtra, Mr. Vijay Waghmare, participated in the solemn opening ceremony of the Consulate General of Belarus in Mumbai. 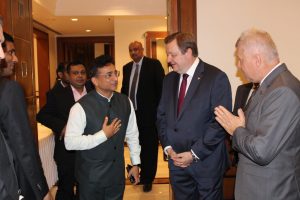 Belarus and India are long standing partners. This year is very special for the Belarusian-Indian relations because in 2022 two friendly countries celebrate the 30th Anniversary of establishing of diplomatic relations.
Belarus and India have regular high-level political dialogue. The President of Belarus visited India three times with state visits and met with the Prime Minister of India several times on the sidelines of various international events. 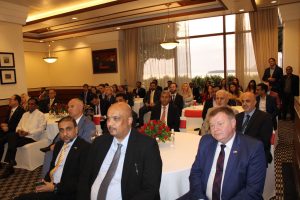 Over the last three decades Belarus and India improved bilateral interaction in almost every sphere of mutual interest. Two countries have a solid legal base, which regulates almost all spheres of interaction.
Mutual trade turnover is growing year by year. Contacts between Belarus and India in the area of scientific, technical and educational cooperation, pharmaceuticals, industry are developing dynamically.
As a global producer of potash fertilizers, Belarus is a reliable partner of India in ensuring the country’s food security.
It is notable, that every year the number of Indian students receiving higher education in Belarus is increasing. In the current academic year, about 1,000 Indian students are studying in our country, mainly in the field of medicine.
An effective mechanism for coordinating bilateral relations is the Belarusian-Indian Intergovernmental Commission for Cooperation in the Field of Economy, Trade, Industry, Science, Technology and Culture. This year countries are planning to hold its 11th Session.
The First Deputy Minister of Foreign Affairs, Sergei Aleinik, noted in his opening remarks: “Despite significant geographical distance, Belarus considers development of a full-scale cooperation with India among the priority areas of its foreign policy.
It is rightly said that the sincerity in relations and the truth in communication – that is about friendship. This is what characterizes Belarusian–Indian relations”.
The Consulate General of the Republic of Belarus in Mumbai is considered to be a bridge connecting the Belarusian companies, business circles and people with the heart of India and its main financial center Mumbai.
In return it will be a reliable source of information about Belarus, its trade, economic, investment, education, scientific, tourism capacities.
Also, it will facilitate the establishment of the interregional ties between the State of Maharashtra and the Belarusian regions that will promote people to people contacts, trade, educational, investment cooperation and touristic exchanges.
For reference: The Office of the Consulate General of the Republic of Belarus is located at the following address:
Bajaj Bhawan, Office 51
Nariman Point
Mumbai 400 021
+91 22 4603 6546
mumbai@mfa.gov.by
Facebook: @BelarusInMumbai
Previous post

Official Visit of President of the Republic of Maldives to India (August 01–04, 2022)