Prime Minister of India, H.E. Mr. Narendra Modi paid an official visit to Bali, Indonesia from November 14-16 to attend the 17th G20 Summit at the invitation of the President of Indonesia, H.E. Mr. Joko Widodo. 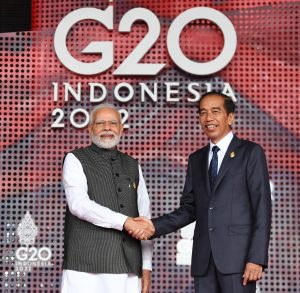 During the Bali Summit, G20 Leaders deliberated extensively upon key issues of global concern under the Summit theme of “Recover Together, Recover Stronger”. Three working sessions hold as part of the G20 Summit Agenda – food and energy security; health; and digital transformation.

<strong>Visit of Federal Minister for Foreign Affairs of the Federal Republic of Germany to India (December 05-06, 2022)</strong>