Both sides agreed that the visit of Foreign Minister Kono at the beginning of the New Year provided an important opportunity for them to identify the agenda of bilateral relations in 2019 and marked an important beginning for a series of high-level bilateral exchanges this year to take our relationship to newer heights. 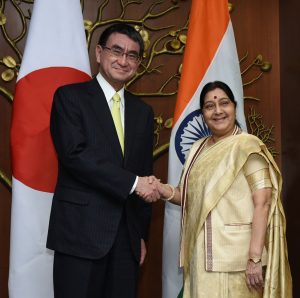 During the talks, the two Foreign Ministers holds discussions on follow up actions taken on decisions taken during the visit of Prime Minister Shri Narendra Modi to Japan for the 13th India-Japan Annual Summit in October 2018, which opened new vistas of bilateral cooperation in areas such as regional connectivity, economic partnership, new and digital technologies, healthcare, renewable energy, defence cooperation, maritime security etc.

The two leaders also exchanged views on regional and global issues of common interest. They reaffirmed that based on shared values and interests, the India-Japan Special Strategic and Global Partnership has acquired a broader significance in the current global context and has become a factor of prosperity and stability in the Indo-Pacific region.

External Affairs Minister congratulated Foreign Minister Kono for Japan’s hosting of the G-20 Summit in Osaka in June 2019, and promised India’s full support for Japan’s Presidency of G-20 this year.

Interview with H.E. Mr. Sailas Thangal, Ambassador of India in the Republic of Cote d'Ivoire with concurrent accreditation to Liberia and Guinea

State Visit of Prime Minister of Norway to India