New Delhi: Dr. Shaida Mohammad Abdali, the Ambassador of Islamic Republic of Afghanistan in New Delhi inaugurated an exhibition titled “Made in Afghanistan: Nature’s Best” which was graced by the presence of several eminent business leaders from Afghanistan and India on July 13, 2018 in New Delhi. 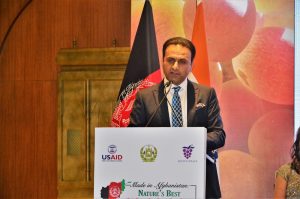 Held in ITC Maurya Hotel, this two-day exhibition was organized by Afghanistan in collaboration with United States Agency for International Development (USAID) and Roots of Peace which showcases Afghanistan’s finest fruits, nuts and spices.

During his remark at the event, the Afghan Ambassador welcomed the Afghan traders to India and acknowledged USAID”s initiative in reinforcing this exhibition and for choosing best title for the exhibition. He also spoke about the latest joint initiatives of Afghanistan in India in order to further boost the trade relations.

Dr. Abdali also stated that the past exhibition, Passage to prosperity earned great success of 250 USD million and the upcoming series of Passage to prosperity scheduled to be held this year in Mumbai would be a major event. The Afghan Ambassador also discussed about trade volume between Afghanistan and India which has increased to 900 Million USD and the scope to target USD 2 billion in near future.

Urging over the steady assistance by USAID and India, Dr. Abdali emphasized on the need to institutionalise agricultural sector in Afghanistan.

During his speech, the Afghan Ambassador suggested Afghanistan-India-US to have a trilateral chamber of commerce in order to forge enhanced business activities between the three countries.

It is worth mentioning that over 500 Indian commercial importers will be meeting Afghan exporters and explores business relationships during the two day event. Business seminars, one- on- one meeting will all form part of this comprehensive two day meet.

Realising the vital importance of India in Afghanistan’s export trade, the Afghan government has launched several such initiatives to encourage Afghan companies to look at Indian export opportunities and this is one key promotion launched over the last one year.